The History of Our Lady of Lourdes

1957 was the year in which the parish of Our Lady of Lourdes began. This was consequent on the movement of population from the urban areas to new sites with room for housing and development. Initially, priest’s from St. Joseph’s, Sale travelled five miles to say Mass and soon Father Hoskinson came to live in Tower House, Chapel Lane.

Weekday Masses were said in the upper room at Tower House and, to begin with Sunday Mass was held in the Worker’s yard in Wood Lane, swept up on a Friday after work but still containing a residue of grit on the concrete floor. Wise parishioners took pieces of cardboard to kneel on. By 1961 Sunday Mass was in the old Scout Hut, furnished for the occasion with very uncomfortable benches.

The number of parishioners grew rapidly during the next decade, families coming from Ancoats, Ardwick, Gorton, Hulme and Salford. But being from different areas was no bar to settling down roots together. It was remarkable how quickly a co-operative and friendly community was established, a characteristic which has remained apparent over the years and is today the chief strength of the parish. Very soon Scouts and Brownie’s were organised, the Union of Catholic Mothers founded and an active choir and dance group sprang to life. Uniforms and dresses were made and at the concerts over fifty children participated. The Processions round the estate, initiated by Father Pinnington, were colourful and a striking witness to faith. A parish council was established and money making fairs took place twice a year. 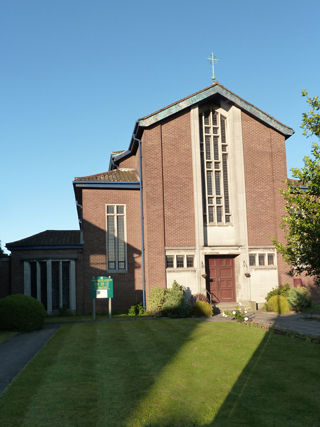 Tower House and its neighbour were demolished and the new church of Our Lady of Lourdes erected on the site together with a new residence carrying the old name of Tower House. At the official opening by Bishop Eric Grasar on Easter Sunday 1964, six children were baptised.

The school opened in September 1964 and was at once oversubscribed, over 300 children turning up on enrolment day. Co-operation between the dedicated teachers and the supportive parish has meant that the school was held in high regard by Catholics and non-Catholics, and that is still the case today.

From 1957 to 2005 Our Lady’s was served by nine different priests. In 2005 it was upsetting to lose a resident priest, but in fact, these last two years have been happy ones. Cared for by the priest’s and deacon from St. Vincent’s, Altrincham, the people have become aware that the laity must contribute more to parish life; there has been a strengthening of participation and a growing determination to live as a vibrant community.

More About The History of Our Lady of Lourdes and Partington

Taking Stock – Our Lady of Lourdes
A Brief History of Partington