The History of All Saints

The Legacy of Father Rourke

The following story was told to me on a recent visit to the local garage. The garage proprietor told me that one of the gentlemen who were chatting in the forecourt was anxious to meet me. I went over to the gentleman concerned and after the usual greetings were exchanged he told me the reason for his desire to have a chat with me. It runs as follows and I will jot it down in the order in which it came and aware that my memory will have failed to recall all the detail.

My name is Clarence Wilson and I live at this time at 148 Carrington Lane, Sale. On February 17 1942 I was captured by the Japanese while serving in the RAF. We were taken in Java. Soon most of us had beri-beri and as you know there are two types of this – dry and wet. In my case I was fortunate that mine was the dry type. Some time later the effect of this disease caused most of us to go blind, We lost weight rapidly and in fact I was reduced to five stones.

We were moved to the island of Haroekoe (Haruku) where approximately 400/500 died. We were moved back to Java and were in preparation for the invasion of Australia. Later moved again to the island of Ambon but when the Yanks bombed it we were moved again to an island across the bay. After the bombing attack back again to the island of [Ambon. During this time I made the acquaintance of a young Irishman called McLaddery who impressed me very much with his strength of faith but alas one morning I found him in the campus with a hole in his back – dead. I carried him to the cemetery (formerly a Dutch Naval Base) and found the cemetery but was refused permission to bury him in the cemetery. So I dug a hole outside cemetery and buried him as best I could. As the body was naked I took off the old tunic I was wearing and wrapped it round him. Although I am not a Catholic I said a few prayers as best I knew. Was this in order? (After reassuring him that it was marvellous he continued) I made a little cross from bamboo and placed it at the head of the grave. It would give me great pleasure to meet some of his family and to tell them what a wonderful boy he was! (I undertook to try and trace the family if I could and this pleased him considerably)

We moved again to the island of Java on this trip, several died from malaria ; others received some treatment at the Mater Dela Rosa Hospital – at this point in time we would regard having a kitten for a meal as a luxury – dogs would be a delicacy! 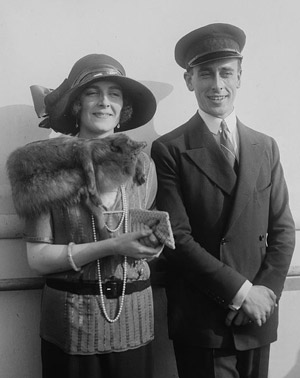 The end draws near: Java for 5 – 6 months and the prison of Bandung! One of the memories I have when the first paratrooper landed in the camp was his lovely hair and how clean and smart he looked. Remember we were all filthy by now and crawling with lice. Visit by Group Captain Ramwey Reigh who met all the senior officers and then later Colonel Takaredo informed us that the war was over and “we are all friends again”. We moved to Singapore on the way to freedom and one of the “boys” stole a goose which we enjoyed. Mountbatten arrived and he addressed us us all in sailor’s language. When he had finished Lady Mountbatten put her hand up in salute and said: “That goes for me too”. Later during the inspection as they were passing along one of the officers accompanying them called me forward – I had been this officer’s batman. He introduced me to the Mountbattens and I was amazed that Lady Mountbatten took my hand which was very scruffy indeed. I did not know what to say but I managed to stammer out “Ma’am, I worked for Brook Bond before this war and when I return to good old England I will send you a lb. of tea”. When I did get back I sent her lb of tea – in fact it was the latest brand called ‘SUPREME’. I still have the letter she sent in acknowledgement. 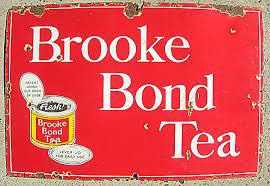 Back home: I arrived back in October 1945: five stone weight: and lived with my sister in Carrington Lane. The land which is now the site for your Church and School belonged to us. So we started up a little poultry and pig farm. This was doing very nicely. Meanwhile many approached us to sell the land – Shell and Esso; a local builder and some Jewish gentleman. But we were adamant that we would hold on to it. The next request came from the Roman Catholic Bishop of Shrewsbury. Again the immediate reaction was to say ‘No’ but then I remembered …………

During the time in the Japanese camp a Roman Catholic Priest visited us every evening. As I told you we were all blind. “Come on you blind chaps” he would say and gather us together and tell us a story. He would slip us a cigarette each or a piece of chocolate. We heard that he flogged everything he had in order to obtain these little things for us – and they meant so much. I will never forget that priest. The last I saw of him – he was being beaten by the Japs with the Anglican Chaplain – both kneeling – because the Japs said they were praying for the defeat of the Japanese Empire. I would love to meet that man again. It was in gratitude for the goodness of that R.C priest to me that I agreed to sell the land for your Church and School.

(Father Cahill relayed this story to the parishioners and they were surprised to learn that it was not Canon Campbell who successfully negotiated the site nor Father Cahill the mighty organiser of this building either. It had all happened because a phenomenal priest met Clarence Wilson in a Japanese jail was good to him).

THE NAME OF THE PRIEST WAS FATHER ROURKE.

These then are the jottings of the first and only parish priest of this outfit to date and I think they might be useful tit-bits for some future genius who may be moved to write the history of the parish of All Saints, Carrington Lane, Sale, Cheshire. 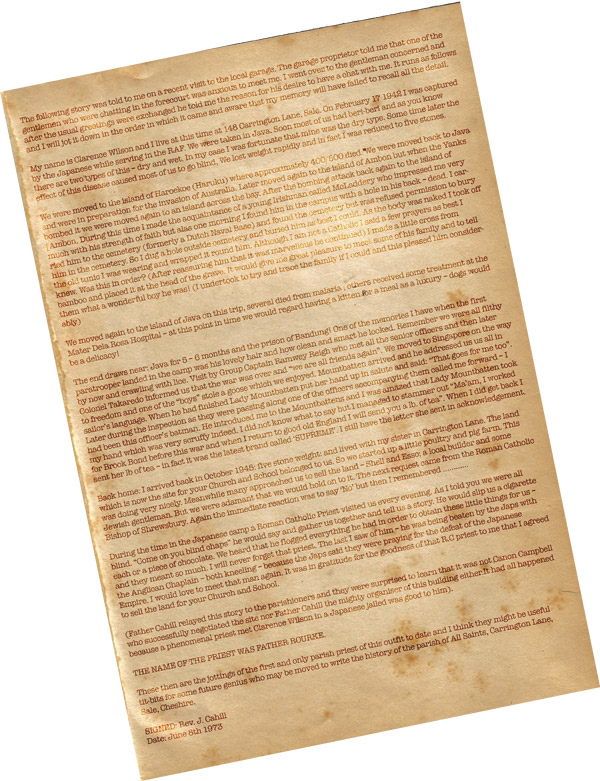