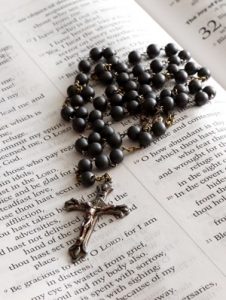 In today’s Gospel, we hear how Jesus was “moved with pity” for a widow whose son had died. So Jesus told her son’s corpse to rise-“the dead man then sat up and began to speak”. In general, Jesus does miracles in response to requests for help, but in this case, no-one tells him anything about the weeping woman, or her dead son. Without anyone recognising who he is, or asking him for anything, or of showing any kind of faith in him, Jesus raises the dead man. Maybe Mary, the mother of Jesus, was there in the crowd. When Jesus dies, she will be heart-broken and weeping for her only son. So maybe Jesus works this miracle to comfort both these women. Maybe he hopes that when his mother is weeping for him, at the foot of the cross, the memory of his restoring to life the son of the widow of Naim, will come into the mind of his own mother, to comfort her. His love for his own mother is definitely in this miracle

In today’s world, we are surrounded by people who are barely alive, in the real sense. Maybe we could do something to lift them up, and give them new life-or improve the quality of their living. Jesus promised to give us life – life in great abundance – It is there for the asking.