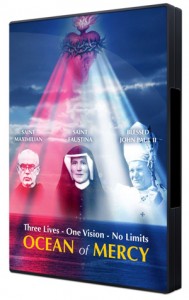 I was lucky enough to meet Mary Grogan after a Wednesday night Mass in early May 2015. Fortuitiously Father Ned chose that Mass to announce the launch of OurParishes.church website and it was hearing about the website that led Mary to introduce herself. We had a chat about the website and she also explained she was actually visiting All Saints to leave a poster promoting an evening she was hosting dedicated to the Divine Mercy in preparation for the forthcoming Year of Mercy beginning on 8th December 2015.

The evening was at Westleigh, the parish centre of St Vincent’s in Altrincham. We ventured into the leafy enclave that is home to West Leigh and found we were the first to arrive. We were greeted by both Mary and her husband Brendan. Brendan had made a beautiful frame for a huge image of the Divine Mercy which took pride of place beside the large screen.

There was a beautiful CD of reflective music playing, very reminiscent of Shania Noll – a favourite at All Saints. After investigation we discovered the singer in question was actually Breda Coman. A swift Google search later and we had located her website and found details of her CDs. Mary and Brendan had met her previously but Brendan was surprised to discover that she hails from his home town of Sandyford in Ireland. What a small world we live in!

We were soon joined by a friendly face in the form of Pauline from All Saints and in fact before long we needed to draft more chairs in to accommodate the growing crowd. 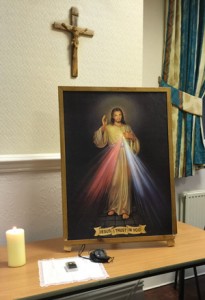 Deacon John, from St Vincent’s, opened the evening before Mary gave a very moving account of her own experience with the Divine Mercy. The lights dimmed and we were treated to the hour long Ocean of Mercy documentary. The story was a fascinating interweaving of the lives of Maximillian Kolbe, Faustina Kowalska and Karol Józef Wojtyła, Pope John Paul II.

Following the video there was an opportunity to venerate a 1st class relic of St Faustina together with Novena Prayer for healing.

It was a wonderful evening and hopefully Mary can be persuaded to present it again later in the year.