A Stained Glass Window in the Making

The Story behind the St Margaret Ward’s Church Entrance Window

It is over a year since the remedial works on St Margaret Ward Church. Shortly after Christmas 2014, the refurbishment works were completed with the installation of a stained glass window in the porch, featuring the image of St Margaret Ward. 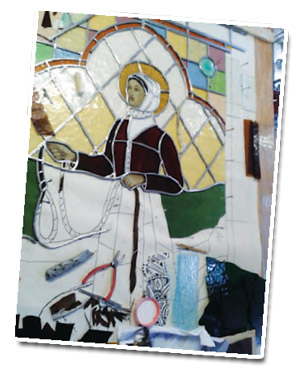 The idea came from Fr Ned’s appeal to parishioners to put forward suggestions for the works, and the installation of the window was supported by the Parish Council. The tradition of ecclesiastical stained glass windows goes back to the 7th century. The craft reached a peak during the Renaissance, but was all but wiped out in England following The Reformation.

The reaction to iconography and the perceived opulent excesses of the Roman Church, led to the destruction of many medieval windows or their replacement by plain glass. Ecclesiastical stained glass was revived in England, in the early 19th Century, led by Thomas Willement, who worked for Pugin. It sustained and grew through Victorian interest in the Gothic, naturalism, leading into the Arts and Crafts Movement, when stained glass became an important compo- nent again in new Catholic Church buildings.

Our Margaret Ward window, was created by Sale craftsman, Tom and Maria King of Artisan Glass, whose workshop is opposite the Sale Town Hall. Tom, used traditional lead and glass techniques and Maria painted the details on the hands, face and dress. The commission took 3 months to research and make. 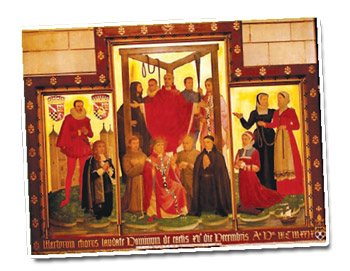 The window depicts Margaret Ward standing by the banks of the Thames, holding a rope. The image is based on a detail, taken from a large triptych reredos in St James Church, Spanish Place, London, painted by Geoffrey Web. Web was an important ecclesiastical stained glass artist of the early 20th century.

Fr Ned was very committed to using local craft people, recognising the continued importance of artists to our community. But it is not always easy in modern building contracts to incorporate local suppli- ers. We are very grateful to the Dioceses Property Manager, Richard Crawford, who pulled out the stops to help make this happen, and to Tom and Maria for their wonderful work.

Margaret Ward was born in Congleton, Cheshire. Whilst serving with a “lady of first rank” in London, she heard of the brutal treatment of a priest, Fr Richard Watson, imprisoned in Bridewell. Visiting him often, Margaret smuggled in a rope and assisted Watson to escape.

Whilst he made good his escape, Margaret Ward was arrested and tortured for 8 days. She refused to capitulate and disclose the priest’s whereabouts or to renounce her own faith. She was hung at Tyburn on 30th August 1588.

Margaret Ward was canonised by Pope Paul in 1970, one of forty English martyrs of the Elizabethan period. Through her image on the window, we are reminded of her uncompromising courage, selflessness and conviction – qualities that should inspire us in our daily lives.